EasyTerritory is pleased to announce our February 2019 release!

Our latest territory building engine supports browser-accelerated processing. For faster machines, this means a territory-build that took 5 minutes can now be done in less than a minute. EasyTerritory still supports our previous server-side technology for scenarios where users are on older hardware (Intel i3 or less).

For customers with international coverage, projects now support realignments even when territory parts are named the same in different countries. In previous versions of EasyTerritory, you would need to break such projects apart for different countries. But now, territory-part layers, such as postal-codes, include country-code information to allow your realignments to take place in a single project.

Our new territory building process has a simpler user-interface without the simplification settings from previous versions. The system now automatically determines the best resolution for your territories. A new missing parts report creates a new project layer after the territory-build has completed. This point layer will show you where territory parts (such as postal codes) are missing from your input data but were filled-in in the final territory created. This helps solve the problem of knowing where you have no coverage in a territory but want clean territories without lots of holes.

A powerful new feature for territory realignment has been introduced in this release. If territory parts, such as postal codes, are selected or queried from your map, and those parts are already in use in a hidden territory (territory visibility is off), a new option dialog is presented:

You are given three choices to determine how the parts from the hidden territory (or territories) are used. First, the parts can be treated as if the territory were visible – a normal realignment operation. Second, you can ignore the hidden parts and they will be left intact in their respective hidden territories. Finally, you can copy the hidden parts, adding them to your target territory in the realignment, while also leaving them in the source territory. This will create an overlapped copy of the parts.

A typical scenario where this feature comes in handy is when doing realignments between territories that are also adjoined to territories you do not want to affect. Say for example you want to move several postal codes between the two territories on the right, but you want to leave the two on the left unaffected.

Previously you would have to precisely click on each postal code along the edges, careful not to select any from the territories on the left. Now, you can hide (uncheck visibility in the markup panel) the left-two territories and then casually select the postal codes you want to move without concern for how many you grab from the hidden territories.

Notice the selection overlaps many of the postal codes in the hidden territories. Upon realign, you will be presented the above dialog where you will choose the middle option:

The result shows a large number of postal codes realigned to the yellow territory, but the two left territories were unaffected.

Enhancements to the Markup Panel

The markup workflows have been enhanced. First you will notice the selection panel has been reorganized and grouped for easier access: 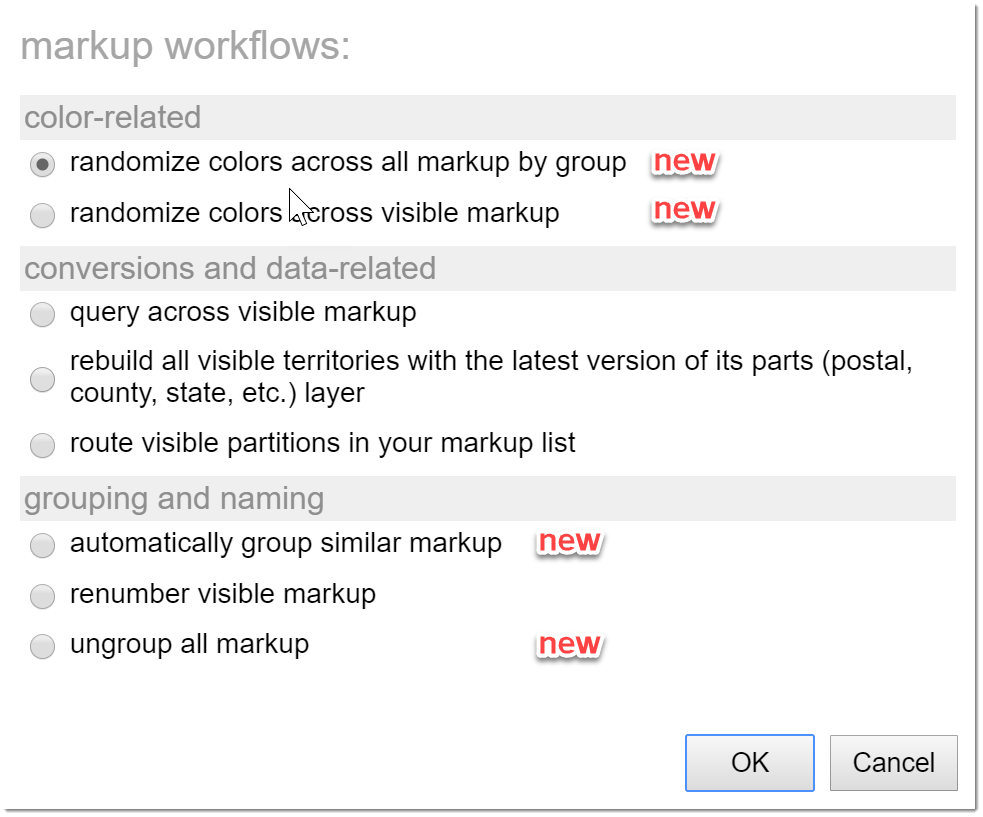 The color-related workflows allow you to quickly randomize the colors of territories or groups of territories. The grouping workflow intelligently groups markup based on type of markup or based on any common tag to the left of the first pipe ‘|’ in the territory name. There is an ungroup workflow to remove all of groups in your project. The panel expander is now more powerful and will not only expand/collapse your markup list but also the groups in your markup.

Quick-Build Territories from a Map Layer

This is a powerful new feature for 2019. In scenarios where your organization has a baseline or current-year territory alignment written to SQL (using an EasyTerritory plugin), users can quickly load their project with a markup-based copy of this baseline so that proposed realignments can be made without affecting the baseline.

To use this new feature, your map layer must be created using the EasyTerritory ProjectMarkupPolygon plugin and written to SQL. Once the layer is added to your catalog, all that is needed to enable the quick-build feature is set a few column flags as shown below:

Once these flags are set in your catalog or configure layers panel, a new option is available in the settings panel in your layer-legend for the configured layer:

Clicking the markup link will query the layer and build territory-markup for every territory in the layer. You can then edit and realign the territory markup as you normally would. This feature fully respects any group-filters so that in scenarios where multiple managers are working on a proposed alignment, only their territories will be built from the layer. This feature provides an alternative to exporting territory JSON as a means of sharing a baseline with multiple managers. It takes the burden off of the administrative planner and into the hands of individual planners.

There are several other new features and enhancements in the February 2019 release. Please contact sales@easyterritory.com if you are ready to upgrade or to sign up for a free trial!