The April 2017 release of EasyTerritory (v2.72.3) is available now. This release is packed full of exciting new features customers have been asking for. We will take a detailed look at some the new features below. If you are ready to upgrade, please contact your EasyTerritory account manager today.

The new BI (Business Intelligence)-only mode allows deployments into scenarios where users have had minimal exposure to the vast feature-set of EasyTerritory. Such scenarios include public-facing applications where users only need to view shared data without requiring the sales productivity or territory management capabilities. In this mode, the mobile view, shape editor and markup panel are hidden and all importing and exporting is disabled. Read-only projects can be set up and pre-configured for users to open and view. Full access to the settings panel for classification and filtering is available and features on the map can still be queried and identified by clicking on them.

In previous versions of EasyTerritory, you had to select a markup shape to know which item it was in the markup panel. Now when you move the mouse over a markup polygon, such as a territory, its name will be displayed in the lower-left of the screen for quick reference.

When you click the delete-all icon in the markup panel you will now be prompted to either delete only markup with visibility enabled or all markup regardless of visibility-state. This provides a convenient means to delete large subsets of markup.

CONVERT A CUSTOM LAYER TO A CATALOG LAYER

This powerful new feature for our April Release allows a custom layer to be converted into a catalog layer. Let’s recap: custom layers are layers created by one of the following means:

These custom layers are created from datasets loaded into a user’s project. As such, they are only available in the project they are created in. If you need to share data from a custom layer, previously you had only two options. The first was to make your project available to other users. However, this is not always desirable as other users might want to see the same data differently than how you configured it in your project (e.g. symbology, classifications, filtering, etc.) The other option for Enterprise users was to save a custom layer in a project to a SQL Server table which is shared as a regular catalog layer with other users. Yet this approach is more complex and requires a SQL table for access along with several configuration settings in EasyTerritory. 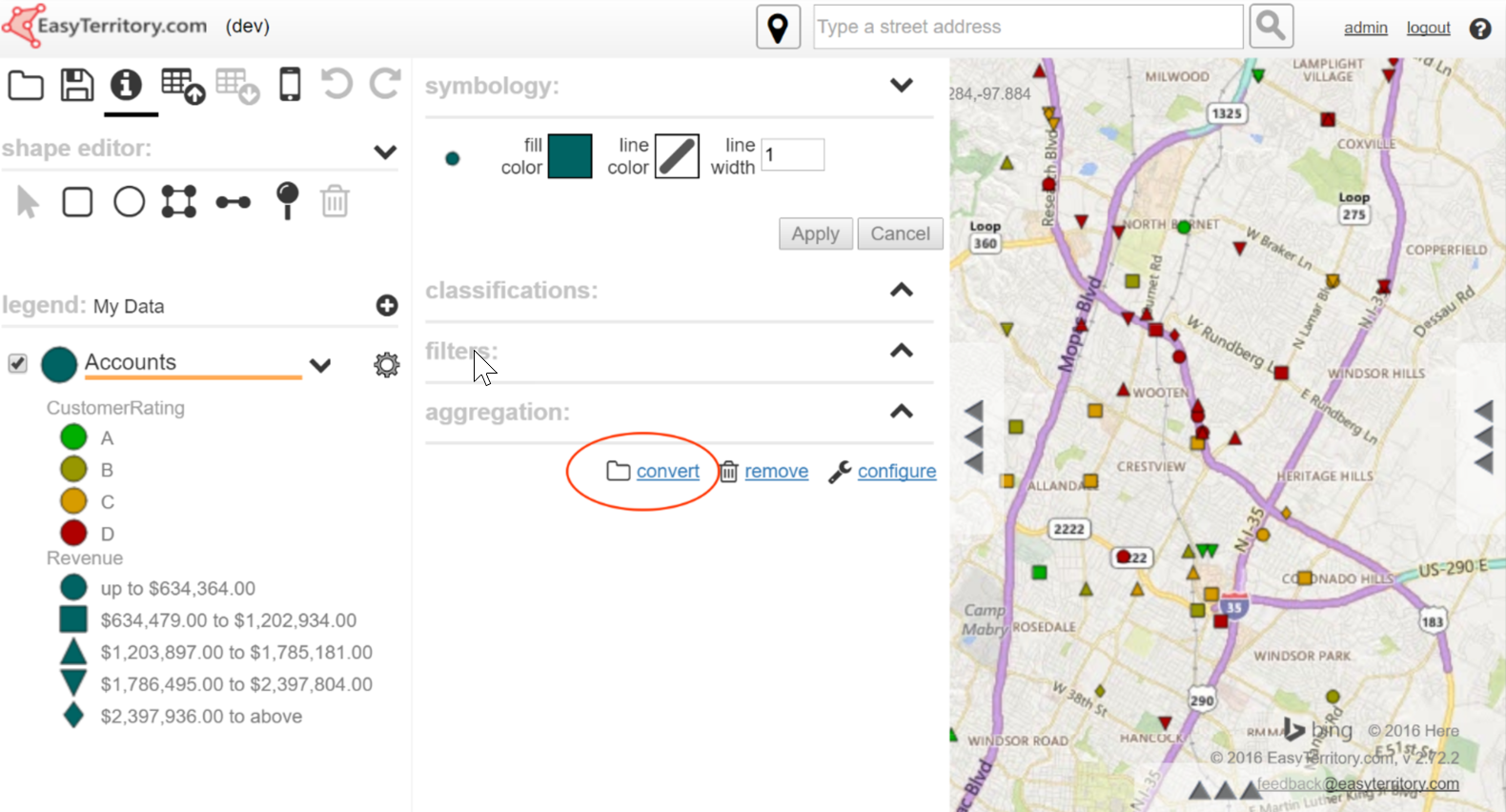 This may seem like such a convenient feature that it should be used in all sharing scenarios. But this is not the case. Here are the reasons why you might not want to use the convert custom layer to a catalog layer feature:

Here are the scenarios where you should consider converting a custom layer into a catalog layer: 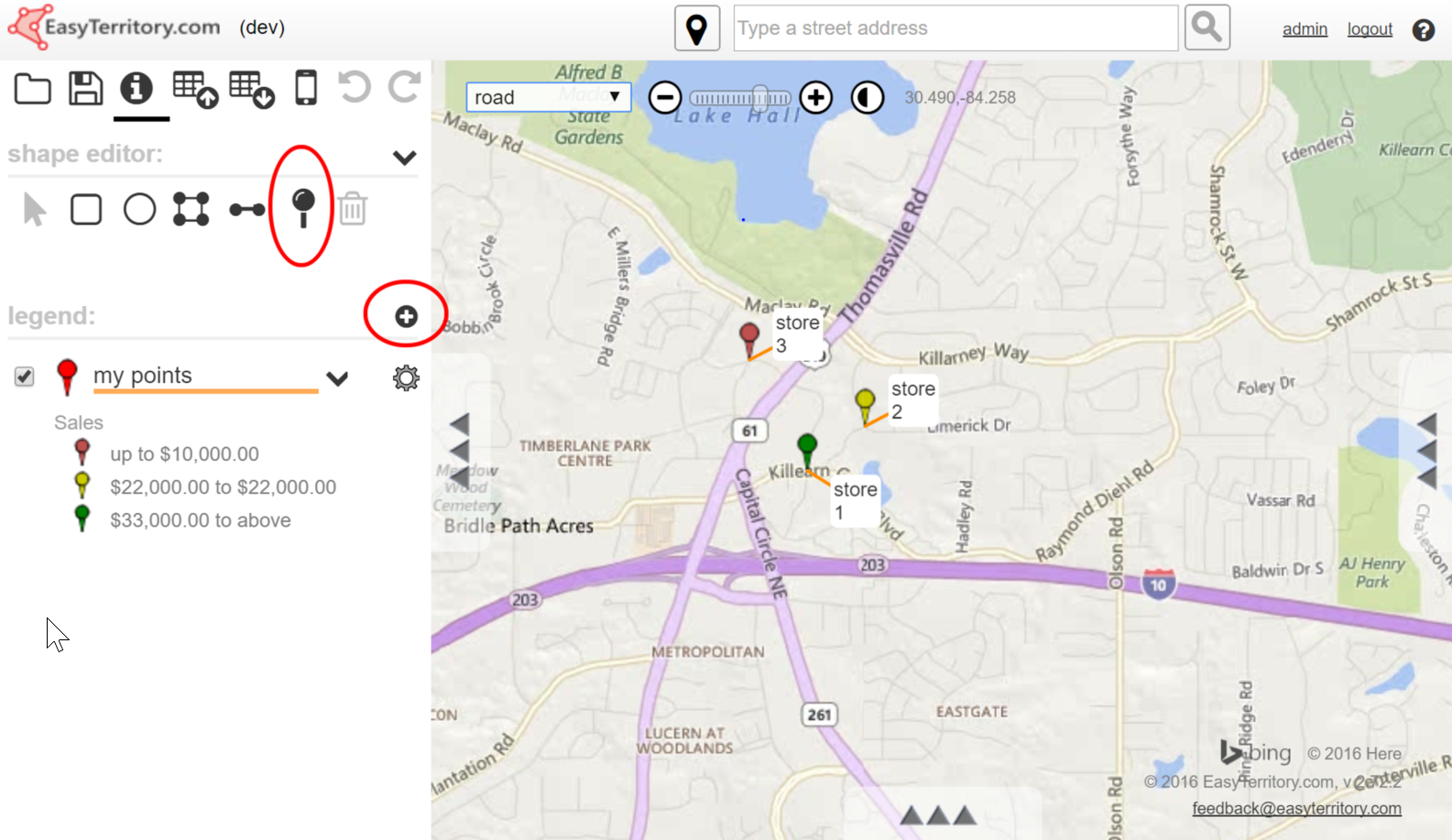 Users can now add one or more custom point layers to their projects. This allows you to build location datasets on the fly or flag important locations in a project. The custom layer can be queried, classified, filtered, analyzed and exported just like any other data layer. To add a new point to a custom point layer, use the new pin icon in the shape editor. Just select the pin and click on the map. Once the pin is dropped you will be prompted to edit the label field and optionally others.

If you add a custom layer to your project, you no longer have to open the rolodex to remove it there. There is a new link at the bottom of the settings panel to remove a custom layer.

Previously the admin setting panel was only available to the super-admin. This restriction has been loosened to allow regular admins access to these settings. It is recommended you use the encryption option for plugin connection strings, especially if you have multiple administrators.

REALIGN TERRITORY NOW SUPPORTS THE ABILITY TO “REALIGN TO REMOVE”

In past versions of EasyTerritory, if you realigned a zip code, for example, out of a territory, you had to place in in another territory or a new shape. This created two steps if you only wanted to delete it. You had to realign to new and then delete the new shape. There is now a third option presented to the user to realign the shape for removal. 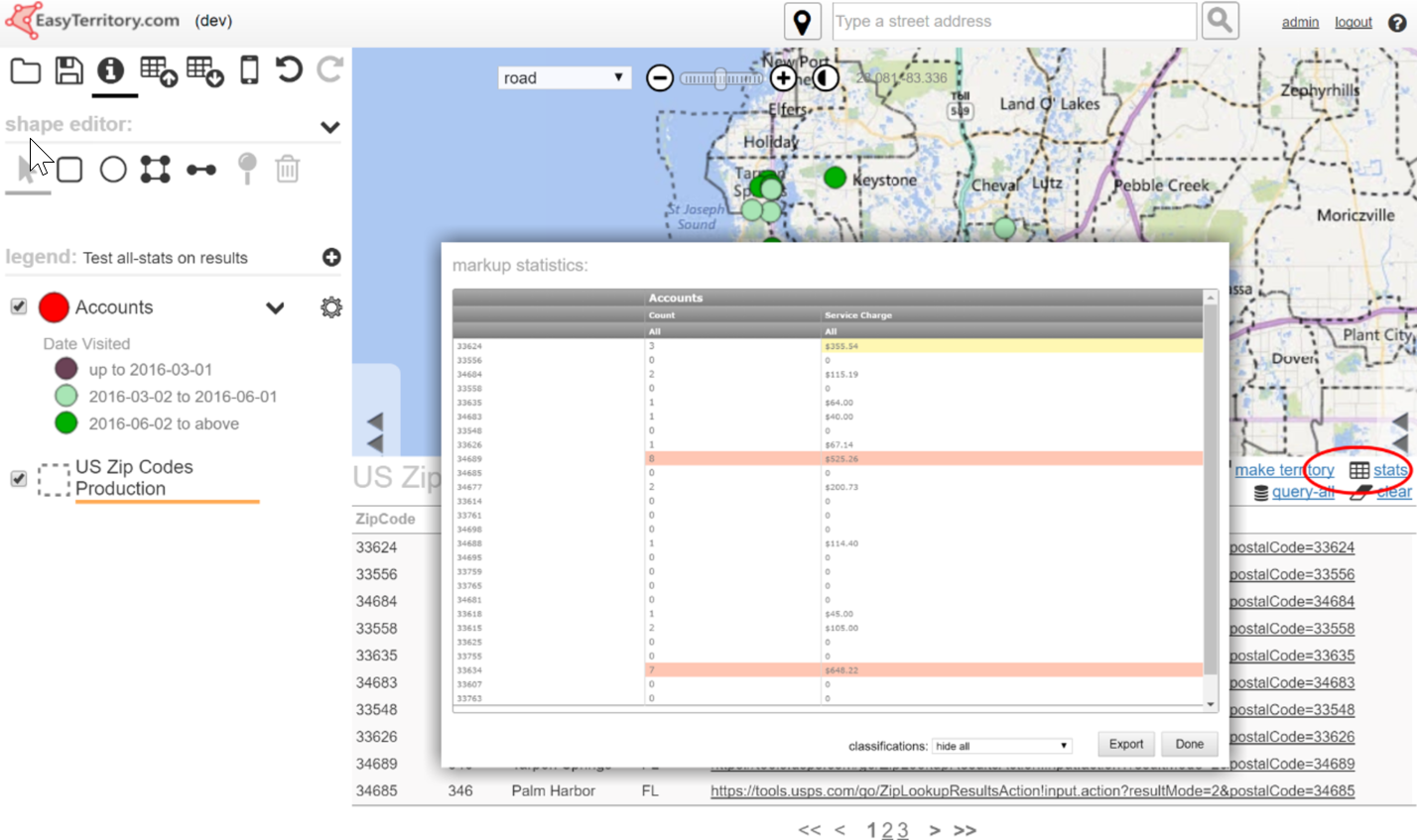 The all-statistics feature previously only worked on polygonal markup and was useful for territory realignment. In our April Release, we have added this capability to the BI side of the product. You can now query a set of polygon features from a layer (e.g. geographic, political or territory boundaries) and get instant shape statistics across all point features in your project.

In previous versions if you set up range classifications the underlying data is expected to be numeric. We now handle formatted string data (e.g. money format) so that you do not have to scrub this data prior to loading into EasyTerritory.

Prior to the April Release, CSV download datasets were first uploaded to the server and the user was provided a download link. This was helpful in that the link could accessed later to download the file again. However, the downside was long delays uploading and downloading the file. Very large files greater than 10MB would take a noticeable amount of time to make the roundtrip. In the April Release this feature has been reworked to write directly from the client to the user’s download folder. This greatly improves transit time and allows for much larger (up to 500 MB) CSV downloads.