Did you know that, in addition to the various out-of-the-box geography layers EasyTerritory has, users can also add their own custom layer to the catalog?

Say for instance a user has created this project for his territories in the state of Texas:

Now imagine another user needs to create his own project, and he needs to know the current boundaries of these Texas Territories for his project. The first user has the option of running a Project Markup Polygons plugin, and then adding his project as a layer in the catalog.

Once the project is added as a layer to the catalog, the second user can then add the layer to his map just like he would any other catalog layer: 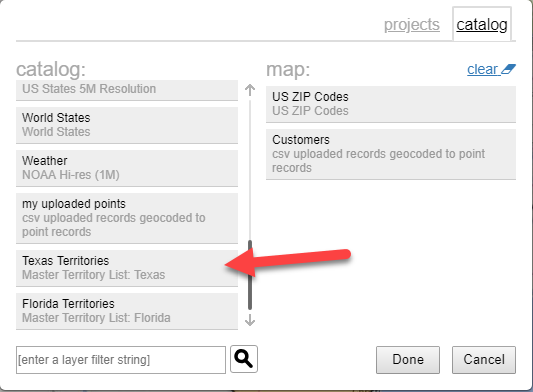 The same polygon boundaries that were saved in the first user’s Markup Panel will then be displayed as a layer on the second user’s map!

Additionally, any time the original project is saved and the plugin is run, the layer will be updated in real time on any project that is using it.

For additional information on this, or any other EasyTerritory feature, please contact us at sales@easyterritory.com.